A champion for Indigenous language

Concerned the language his ancestors spoke was disappearing, Cameron Adams has set out to find ways to revitalize Indigenous languages. 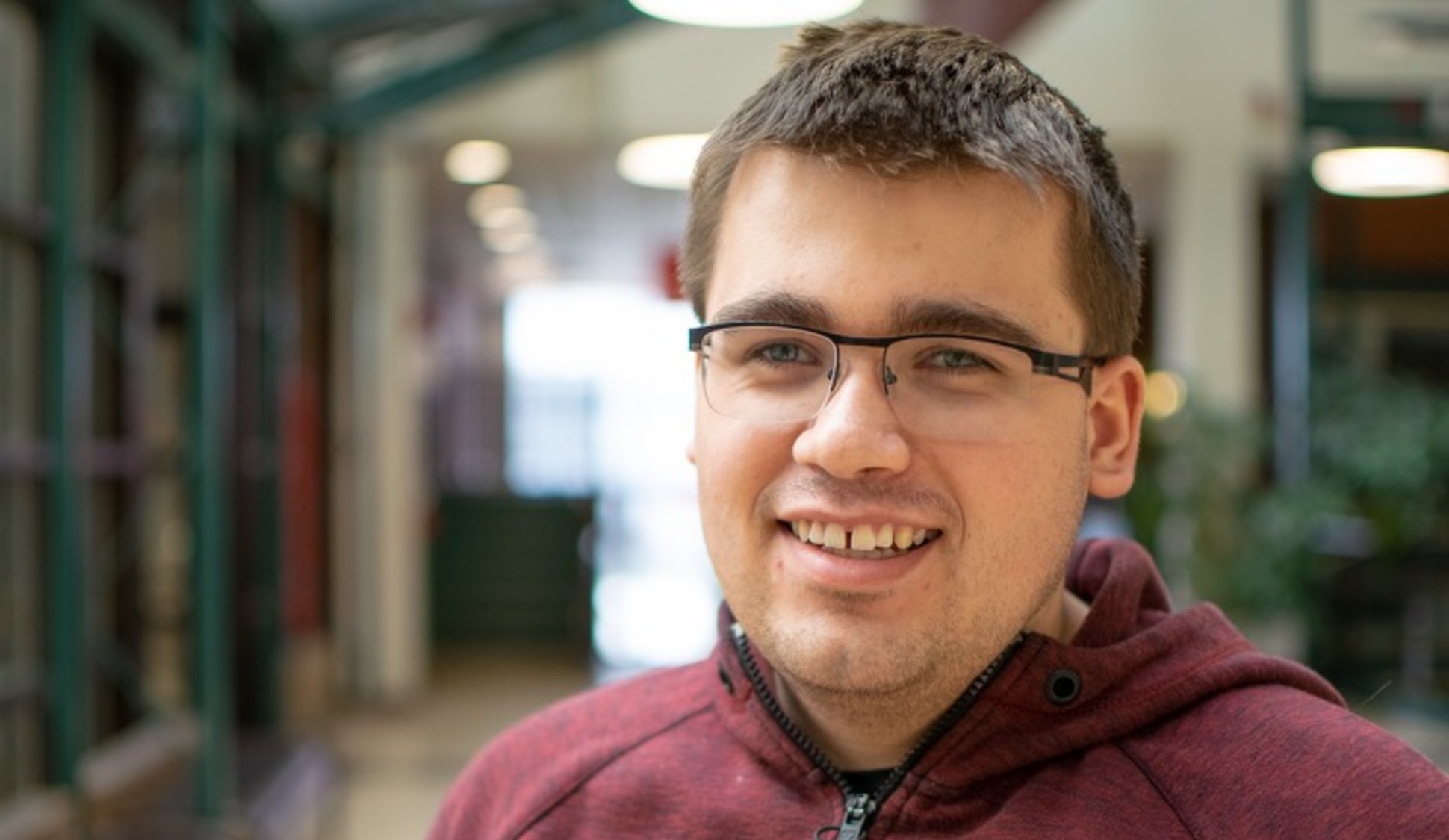 Cameron Adams spent his last year of high school translating the daily specials in the cafeteria into Cree.

His interest in Indigenous language began with a genealogy project. While studying his family tree, he discovered his great-grandmother grew up speaking Swampy Cree. His family is from Norway House First Nation and Berens River First Nation, but no longer speak Cree.

It worried him that less of the language his ancestors spoke was being passed down with each generation. When he arrived at The University of Winnipeg, the first course he enrolled in was Introductory Cree with Ida Bear.

Originally from Norway House Cree Nation, Bear is an inspirational teacher and Indigenous language advocate. Her mentorship, along with Elder Margaret Osborne, inspired Cameron to dig deeper into language revitalization.

He began meeting with Osborne weekly, speaking to her in Cree and listening to her stories.

Want to know more about Education at UWinnipeg?

“I learned how to write in our standardized writing system, that’s something I practiced a lot,” he said. “I was learning the sounds of the language, learning how to write it properly.”

Cameron was eager to take higher-level courses, but none were being offered at the time.

Working closely with Osborne, his idea took shape. As the project unfolded, more Cree elders stepped in to help. Together, they translated thousands of words into Cree text and audio files.

“I’ve had help from so many people and been offered so many resources,” said Cameron. “Even though this wasn’t a class project, the university has supported me right from the start.”

Once Cameron has his eyes set on a goal, he is tenacious about achieving it. Since age 11, he has been dealing with an acquired brain injury. One of the keys to his success is to reach out for help when he needs it. “I’ve faced certain challenges, but I’ve accessed tons of resources at the university which I’m grateful for,” he said.

Until the pandemic hit, he lived on campus in residence, eating breakfast at Pangea’s and lunch at Leatherdale Hall where his go-to order was the chicken Caesar salad. “It’s the best on campus,” he said.

He spent most of his days at the Aboriginal Student Service Centre (ASSC) studying between classes, always in the same chair at the first table on the right. It was there that he met Shannon Vickers, a professor in the Department of Theatre.

She had stopped by the centre to meet with an elder about her research into best practice in Indigenous accents training. When she heard about Cameron’s language revitalization work, she asked if he’d like to be a research assistant.

“I really enjoyed my experience on this project,” said Cameron. “I met so many members of the Indigenous community, learning their languages, how to research, and how research ethics works. It also increased my technical skills.”

The connections he made with elders reinforced the importance of language being passed down from one generation to the next.

“I thought it would be cool if I could teach this language eventually, so I decided to transfer to education,” said Cameron.

Then, Dr. Lorena Fontaine told him about the university’s new Indigenous Language program, which he could take as part of his Integrated Bachelor of Education and Bachelor of Arts. “It’s a brand-new area and they transferred me into it right away,” he said. “I’ll be the first person to graduate with it.”

Adams says Fontaine has been a huge support and inspiration.

“I’m so thankful that I have been mentored throughout my degree,” he said. “It makes me want to empower people in that way, too.”